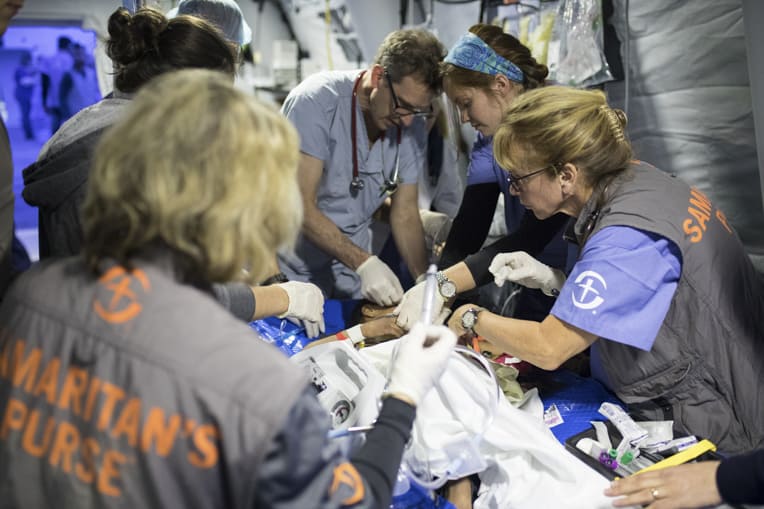 Bomb blasts, gunfire, women and children peppered with shrapnel — these were some of the experiences of one Calgary cardiologist working at an emergency field hospital in Mosul, Iraq.

Bomb blasts, gunfire, women and children peppered with shrapnel — these were some of the experiences of one Calgary cardiologist working at an emergency field hospital in Mosul, Iraq.

Dr. Karas — whose real name can’t be disclosed for security reasons — recently returned to Canada from a three-week medical mission with Christian relief organization Samaritan’s Purse, treating those injured in the ongoing battle between ISIS and Iraqi government forces.

Before the medical field station was set up near Mosul, Karas said wounded patients were making a three-hour trek to the city of Erbil for medical attention, many dying along the way.

Doling out care closer to the front lines, where sounds of artillery blasts rang ceaselessly through the day and night, was risky, but Karas said that was where help was most needed.

“What I saw was beyond my expectations and imagination,” Karas said. “In the beginning, I felt the emotion of anger because I felt life was not fair. Why are women and children suffering like this?”

But Karas said he grew conflicted when he was forced to serve another kind of victim — ISIS patients.

“I would be taking care of a young kid injured from an ISIS weapon, and five minutes later I’d have to help a suspected ISIS patient,” he said. “It was this weird thing offering medical care to both of them at the same time without discrimination or feeling a negative thought — it was difficult as a human to balance the emotions inside me.”

While aware of the risks the journey poses, Tim said the plight of innocent civilians affected by the devastation in northern Iraq was something he couldn’t turn his back on.

“One of our main priorities is helping civilians trapped in a desperate situation,” Tim said. “There’s no one really going over there to help, and Samaritan’s Purse is stepping in to serve. To be a part of that is incredible.”

Karas, who is now back on Canadian soil, said the trip shed a new light on the life he lives at home.

“We live in luxury. We don’t see what’s happening around us,” he said. “When we see the reality of what’s happening in a city like Mosul, the world is much bigger than us. It’s changed my life.”

For more information or to donate, visit: samaritanspurse.ca