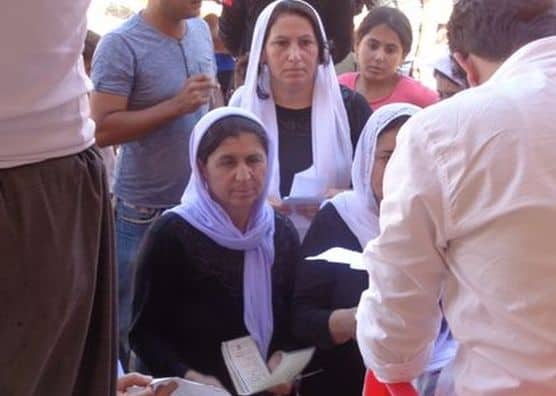 "When you can actually make a difference and can help people it helps you to cope with what you see and hear when you get over here."

Photo above: refugee camp west of Dohuk in Kurdistan, courtesy by Bruce Piercey.

Whenever something awful happens in the world, it’s Bruce Piercey’s job to go there and help fix it.

Samaritan’s Purse’s man in the Middle East is on his way back from Kurdistan where he was overseeing the building of a medical and community centre for refugees of the ISIS conflict.

“We’re setting up a community centre and medical centre to provide services for that community,” Piercey explained.

“There is a medical clinic inside the camp and there’s another one in the community, but that was built for the original 25,000 so both of those have been overwhelmed by the sheer numbers.

It’s Piercey’s third trip out there since this project started-the first trip was last year in September.

“We were meeting with people who had just arrived and they were still in makeshift tents,” he said.

“I sat down and heard their stories of harrowing escapes they’d had and the cruelty of this group, ISIS, and it just sort of grabbed a hold of me and it has been my main focus for the last year-trying to generate support for our work and make a difference in their lives.

“It’s very, very difficult to see these people living in these conditions.”

But he added: “When you can actually make a difference and can help people it helps you to cope with what you see and hear when you get over here.”

Meanwhile, Piercey said, life in Kurdistan has been a strange experience in a lot of ways.

“They’re talking about the same things as in Alberta,” he said.

“They’re worried about the low-price of oil and people being laid off and the economy slowing down and real estate prices dropping.

“They’re having these sorts of conversations while they’re sitting 30 km from the Islamic State and listening to jets fly overhead.”

Tales of the Refugees as told by Bruce Piercey

Their life was humble but proud before it was taken away by ISIS.

A father, his three sons and their wives and eight kids all lived together in a two-room apartment in the city of Aleppo, where as a family they ran a small local sewing business.

When the Syrian city became a conflict zone they found their home and business destroyed-reduced to rubble.

They made their way to another Syrian city called Kobani, where they had just a few months peace before that city, too, found itself under attack.

Again they ran for their lives, this time fleeing through Turkey to reach Iraq, where they found themselves at the refugee camp to Dohuk’s west.

“If we could just get a couple of sewing machines,” they told Piercey, we could restart our business and feed our family.”

Piercey said this family’s story is a typical one for this place.

In the hills outside Mosul, a family of 33 Yazidis lived and farmed for themselves-and then later for ISIS.

Extremists came to their small bit of land eight months ago but instead of capturing or killing them the extremists told them they would be left alone in exchange for their sheep for food.

As time wore on, the visits from ISIS became more and more frequent, and in addition to taking their sheep the extremists began to demand they convert to Islam and began threatening the family’s young women directly.

They fled their land, which incidentally is now a three-day walk from the front line.

But two women, both with very young children, decided the trip was too dangerous and chose to remain behind.

The rest made their way through the mountains to the refugee camp.

Nobody knows if the loved ones they had to leave behind are alive or dead.

And that too, Piercey said, is a common story.