Bringing back hope after ISIS terror

Islamic militants from ISIS surrounded the 14-year-old girl’s village near Sinjar, Iraq. Faced with the choice  to convert or die, her family fled for their lives.

As they ran, Amal and her 12-year-old sister, Kamila, became separated from their parents and were captured by the jihadists. The sisters were taken to a house along with 102 others. 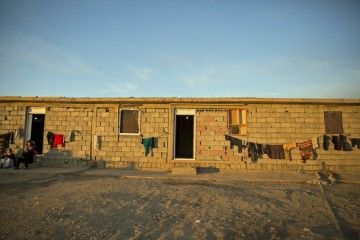 Families  who once lived a comfortable life are now bunking in crumbling buildings.

“Tomorrow we will take you to Mosul,” they were told.

Fearing what might await in the ISIS-controlled city, 20 captives planned to escape. Before they could go, four girls were taken by the terrorist leader and three boys were executed. Shouts and cries erupted from the group as they witnessed this horror.

Knowing that they could be next, the hostages made their escape. They ran from the house where they were being held. Tragically, not everyone made it.

“ISIS shot at us and they slaughtered my little sister,” Amal said.

Still in visible shock from her only sibling’s death, Amal said without emotion, “I couldn’t do anything. I only cried and ran.”

The escapees traveled the 18-mile (30 km) journey to Mount Sinjar  on foot. There,  Amal was reunited with her parents.

For the next eight days, the family had very little water. Amal only ate three meals during that time. The food came from the generosity of others trapped on top of the mountain who had received supplies by air.

ISIS had the refugees pinned down. It seemed only a matter of time until they ran out of supplies, or were attacked and overrun. But on the ninth day the Kurdish army, the Peshmerga, opened the road off the mountain.

Amal and her parents fled to Syria, where Kurdish Syrians welcomed them, giving them food and water. When they were offered the choice of staying or going to northern Iraq, Amal’s family chose the latter. They settled in a mountain village on August 23.

They found a home in a crumbling building that Saddam Hussein once used to store military supplies. A Samaritan’s Purse church partner gave them blankets, mattresses, and pillows.

Church members told Amal about a special event that would take place on December 15. Samaritan’s Purse was delivering Operation Christmas Child shoebox gifts at the community center on Saddam Hussein’s former compound, just down the hill from ruins of his palace.

In the shadow of past tyranny, Amal was one of 125 children that gathered and learned the chorus, “My God is so great, so strong and so mighty.” An Operation Christmas Child ministry partner shared the Gospel with them along with pictures to illustrate the story.

As the sun was beginning to set, each child received a gift-filled shoebox along with a booklet that tells the Gospel story. Most of the boys and girls were Yazidis, ethnic Kurds whose religion mixes elements of Zoroastriansim, Christianity, and Sufi Islam. The celebration gave this small group a glimpse of the true meaning of Christmas.

Amal said she was “very happy” when she got her gift-filled shoebox. Her favorite item was a notebook she can use for drawing. This gives her a tiny reminder of life in her old town when she went to school and as she said, “I wasn’t in need of anything.”

On December 10, Samaritan’s Purse airlifted 60,000 gift-filled shoeboxes to displaced children like Amal in northern Iraq. It was part of a broader relief effort by Samaritan’s Purse to provide warm clothing, winter jackets, blankets and heaters to Christians, Muslims, and Yazidis displaced by ISIS in Erbil and the Dohuk governorate who are facing a bitterly cold winter in tents and abandoned buildings.

Recently, our Water, Sanitation and Hygiene program manager came across 620 displaced people living in a building with a single bathroom. We are now working to provide them with a septic system that will better meet their sanitation needs.

ISIS remains in control of large areas of the country and many thousands forced from their homes last year remain in desperate need. Samaritan’s Purse is now moving beyond immediate relief and winterization to programs that focus on long-term needs.

The situation can seem hopeless, but Jesus is present as Samaritan’s Purse is able to provide the hope of the Gospel. The song the children learned at the shoebox distribution is true: “There’s nothing that God cannot do.”

Please continue to pray for the people displaced by the terrorists, and for an end to the violence wrought by the militant jihadists.